Note:  A space between words is searched as “AND.”

Both (or all) the words appear in the document

Example: Treasury AND anti-inversion AND guidance [AND must be uppercase]

Example: law OR legislation [OR must be uppercase]

Example: audit* will retrieve all words beginning with "audit," including audits, auditor, and auditing

Example: legislative –history [NOT must be uppercase]

Use fuzzy match to retrieve words with similar spelling

Example: "Ireland inversion"~5 retrieves documents where Ireland is within 5 words of inversion

Example: (Swiss OR Switzerland) AND bank* AND (record or account)

In the search box, type codesections: followed by a code section

Put the citation within quotes:

To retrieve documents with terms appearing in a given field, enter the field followed by a colon and then your term or phrase (phrases should be in quotes).

To search for more than one term in a given field, precede each term with the field name followed by a colon.

Fields can be used together:

Could Trump Really Make Mexico Pay for the Wall? 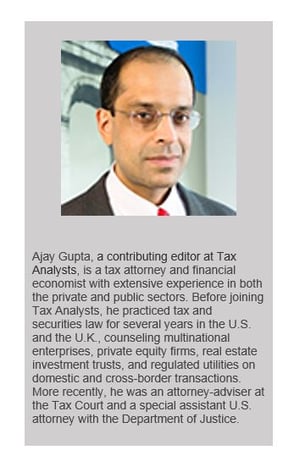 Can Donald Trump use his “very powerful hands” to force Mexico to pay for his promised wall along the U.S.-Mexico border? In an expletive-laced rant on February 25, former Mexican President Vincente Fox dismissed Trump’s “effing wall.” Trump retorted that “the wall just got 10 feet higher.” Challenged on details of his plans for making Mexico pay, Trump points to its $58 billion annual trade surplus with the United States. But does that imbalance in trade offer a viable source of financing for a wall between the two nations?

A widely cited CNN analysis estimated that building the wall would take about four years and cost around $10 billion. By comparison, revenue from tariffs on all imports into the United States during 2015 was a little over $33.8 billion. Duties on imports from Mexico accounted for almost exactly a hundredth of that, or approximately $338.2 million. Even if we spread the cost of constructing the wall over 10 years—the standard federal budgeting horizon—financing it entirely from tariffs would mean quadrupling existing duties on Mexican imports. That would expose over $236.3 billion of current annual U.S. exports to Mexico to retaliatory tariff increases. Moreover, it is inconceivable that additional duties of that magnitude on Mexican goods would not prompt U.S. importers to look to other countries as alternative supply sources, thereby shrinking the base of, and the resulting revenue from, the new duties. Mexico might pay for the wall, but only in the sense that its exports to the United States would suffer. And to the extent the additional duties actually enhance revenue, U.S. consumers would be the ones paying for the wall in the form of higher prices.

Most important, however, the United States’ North American Free Trade Agreement and World Trade Organization commitments mean that any unilateral tariff increases would be limited to colorable claims of anti-dumping measures or countervailing duties to offset Mexican subsidies. Maybe a Trump administration could revisit a trade dispute that began in March 2014, when U.S. sugar producers claimed that subsidized Mexican imports were flooding the domestic market. In response, beginning in August 2014, the United States imposed 17 percent anti-dumping and countervailing duties on imported Mexican sugar. The duties were suspended in December 2014, when the two countries instead reached an agreement establishing a ceiling on import quantities and a floor on their prices. Scrapping that deal and reverting to the 17 percent duties would have yielded about $134.5 million on the $791.2 million of raw and refined sugar imported from Mexico in 2015, provided those import quantities remained unchanged in response.

But again, confronted with those steep duties, neither Mexico nor U.S. businesses—sugar importers and consumers—are likely to remain silent. Indeed, following the initial imposition of duties, Mexico had threatened retaliatory duties on U.S.-produced high-fructose corn syrup; U.S. importers had begun looking at Colombian and Guatemalan sugar as possible alternatives; and domestic candy makers had complained about the increase in price of a key ingredient.

Compared with the inflow of goods from Mexico, the outflow of cash to that country might offer a more durable source of revenue. For 2015, Mexico’s central bank reported a total of $24.8 billion in remittances—money transfers from migrants abroad to family and friends in Mexico. According to the Pew Research Center, more than 98 percent came from the United States. In contrast, less than $1 billion was remitted from individuals in Mexico to the United States. The lopsided nature of the remittance flow suggests that the United States could tax outbound remittances to Mexico without fear of a retaliatory Mexican tax on inbound remittances from that country extracting a comparable amount. On the other hand, a tax that imposed a significant burden would only end up driving Mexico-bound remittances to “informal” channels or to circuitous routes via third countries. Perhaps a 1 percent tax collected from banks and money transfer operators, such as Western Union and MoneyGram, could generate revenues of $100 million to $150 million, after leakages to the untaxed sector.

The United States would be at liberty to respond by using its domestic tax laws to disproportionately target Mexican individuals and businesses. The existing tax treaty with Mexico would be no bar; a later federal statute would override it. The real constraint would be the fact that U.S. residents have far greater Mexican-source income than Mexican residents have U.S.-source income. But at a minimum, the U.S. Treasury could ensure it is no longer picking up the tab of higher, or any, Mexican taxes on U.S. residents—by making these taxes ineligible for the foreign tax credit.

At $10 billion, the cost of building the wall is not even a rounding error in a federal budget that had total 2015 expenditures of $3.7 trillion. After all the dust has settled, from building the wall and trying to force Mexico to pay for it, it is highly unlikely that any net additional revenues would have been raised. But depending on how elaborate the charade is of portraying Mexico as the source of funding, the chilling effects on bilateral trade could range from mild to polar.

Then again, this wouldn’t be the first time nativist angst would have brought about trade and tax policy changes that do little except discourage investment and promote creative planning. In 1980, alarmed at Japanese and other foreigner investors gobbling up vast tracts of the sacred U.S. homeland, Congress enacted the Foreign Investment in Real Property Tax Act, taxing nonresident aliens on gains in U.S. real property interests. That measure, which raises little revenue, is now almost universally recognized as inhibiting foreign interest in U.S. infrastructure projects. Among the legislation’s original cosponsors was Sen. Barry Goldwater, doyen of modern-day conservatism. Those who accuse Trump of betraying conservative principles for populist grandstanding seem to have a selective grasp of history.

Viewpoints from our experts

Our contributing editors are experienced tax lawyers, prolific writers, and gifted speakers…and they aren’t shy about sharing their opinions.

Our Opinions Blog is: